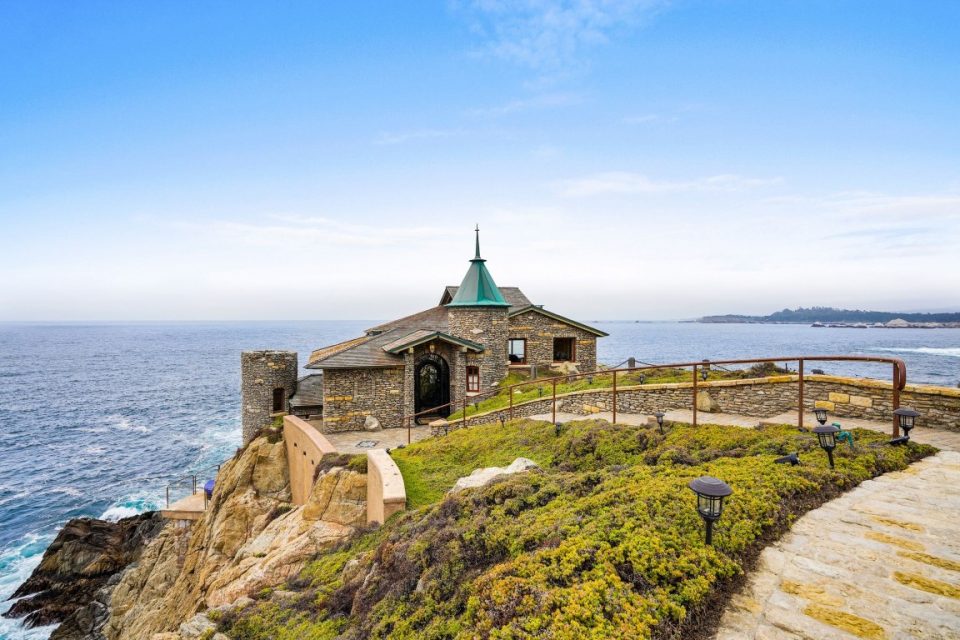 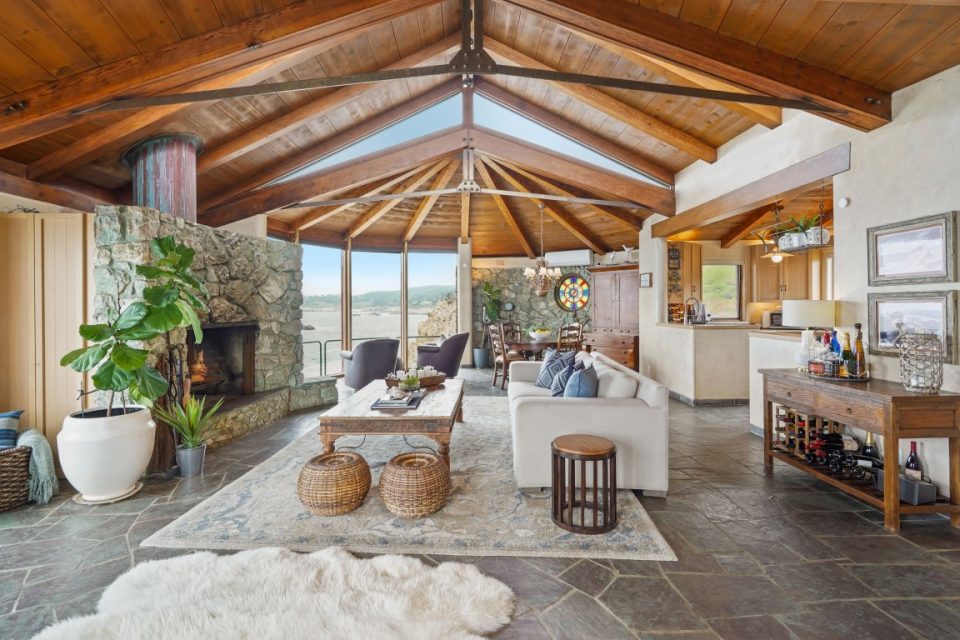 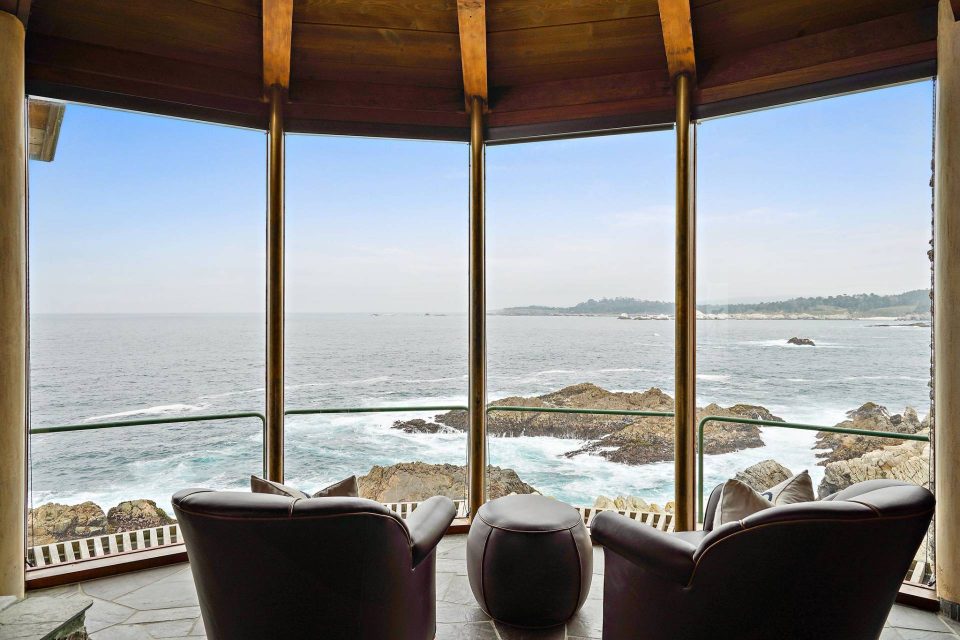 A stone fireplace paired with wood beamed ceilings give a rustic vibe. 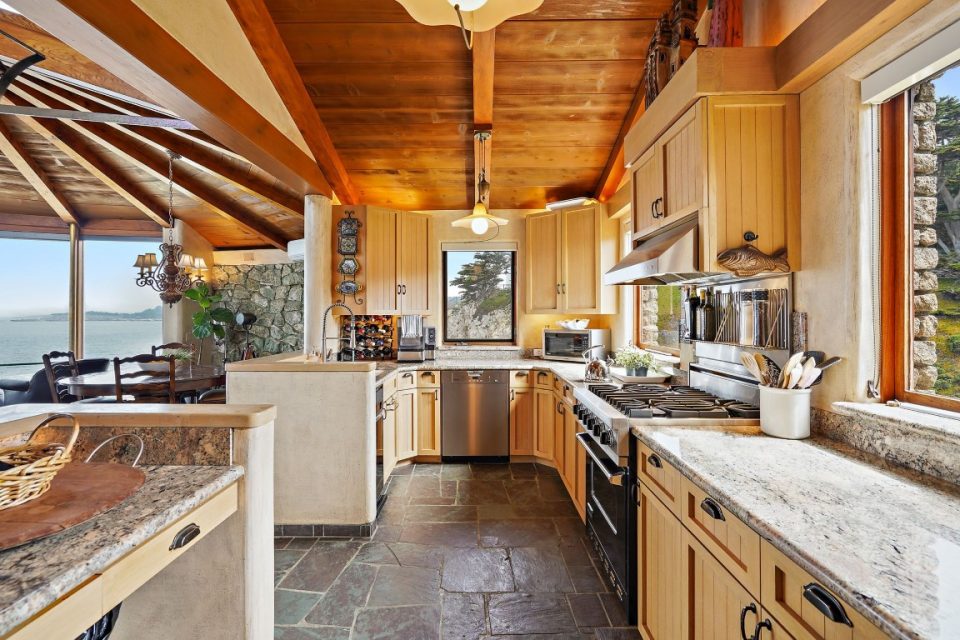 The kitchen in the open floor plan also has exposure to ocean views. 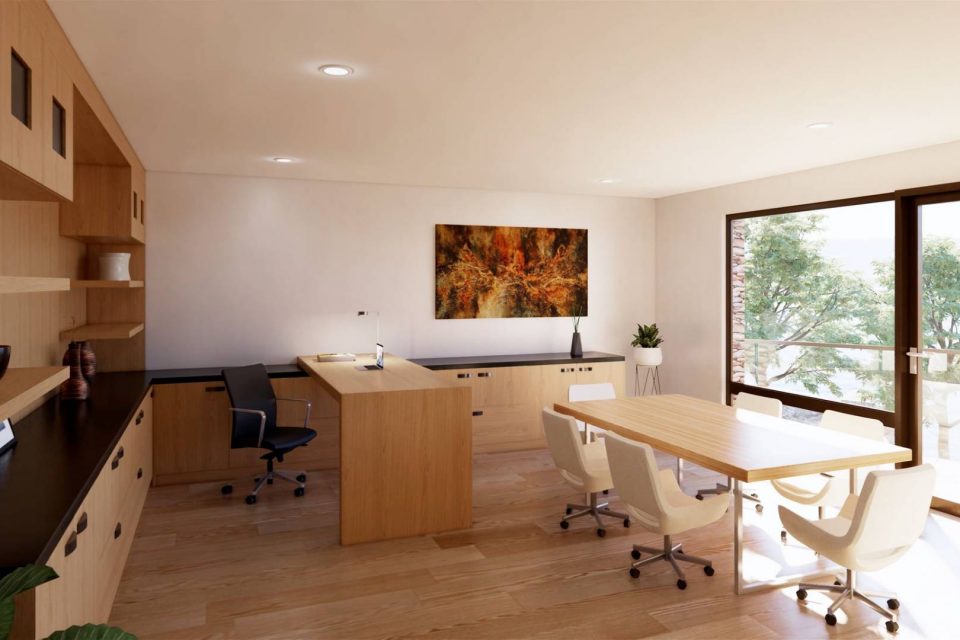 An office could also be reconfigured to serve different purposes. 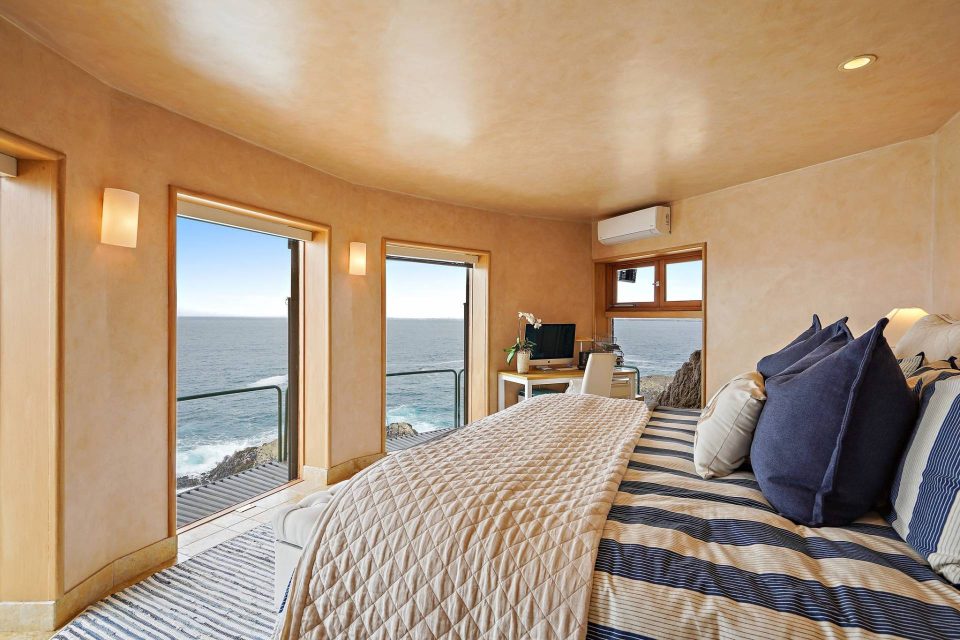 Be lulled to sleep by the sound of crashing waves. 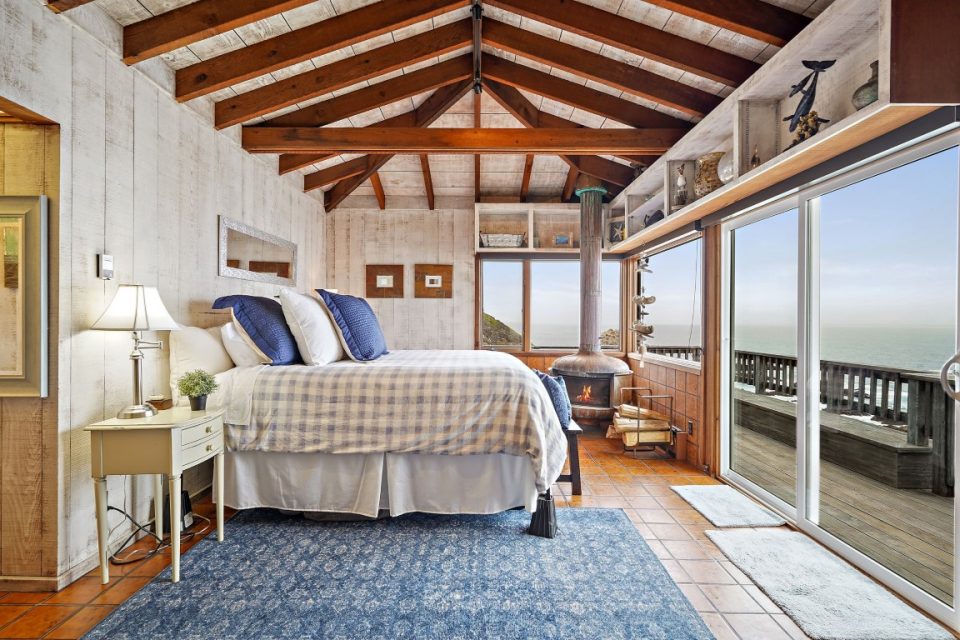 This bedroom has a vaulted ceiling. 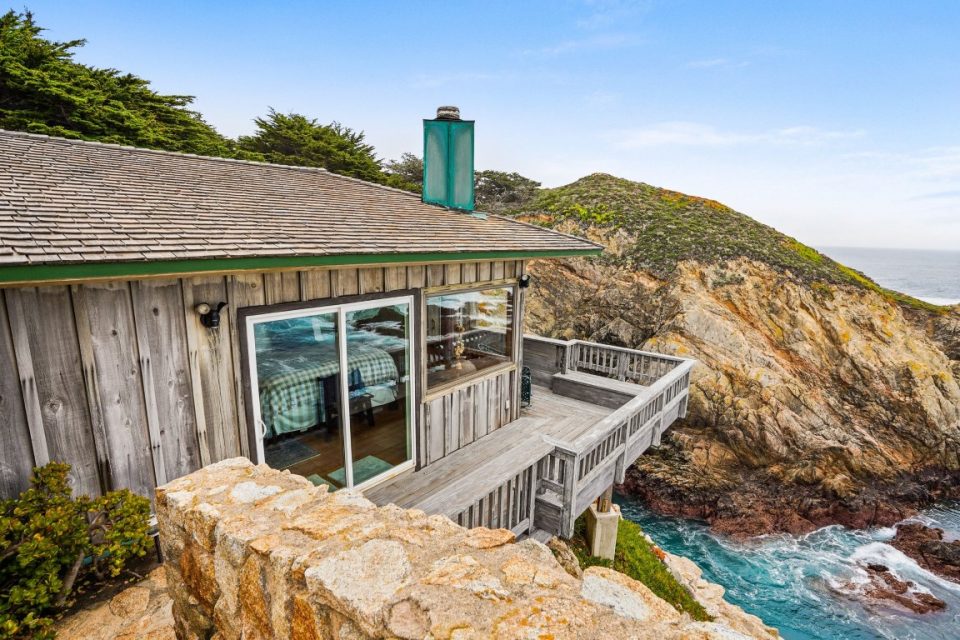 A balcony looks over the waves crashing on rocks below. 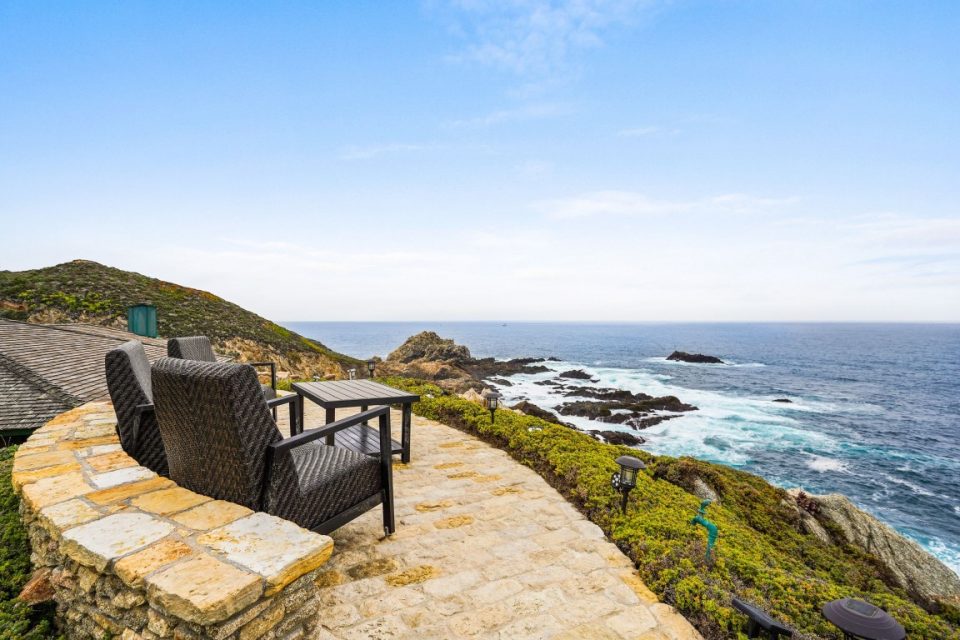 Various seating areas around the property are great for sunning and enjoying ocean breezes. 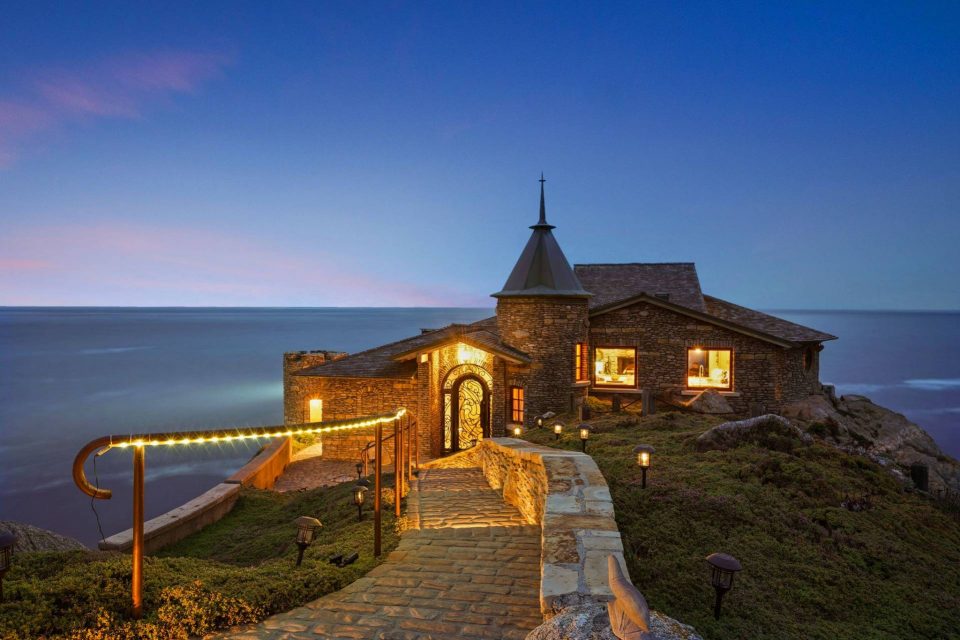 The house and its surrounds are particularly enchanting in evening light. 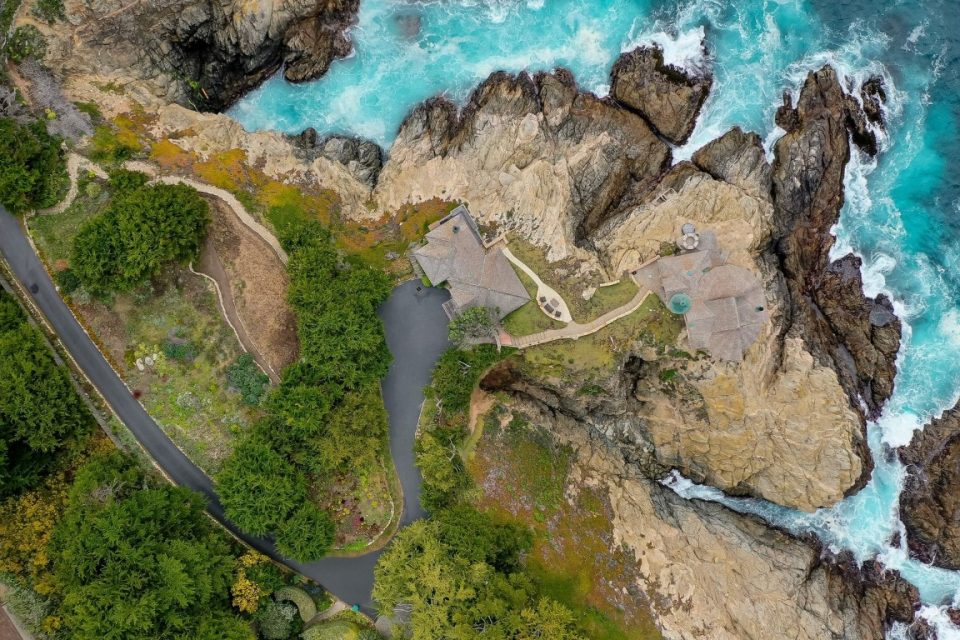 An aerial view shows the ruggedness of the coastline.

Well known for her starring roles in the award-winning films Picnic, Strangers When We Meet, Pal Joey, and her twin roles in Vertigo, Kim Novak chose a shorter film career, but the movies she made have become classics enjoyed as much today by movie buffs as when they were released in the 1950s and ‘60s.  Preferring a quiet lifestyle, in 1961 Kim chose a home far away from Hollywood on an outcropping of rock in Carmel, California where she lived until 1973. The home is now for sale, priced at $12.5 million.

One of California’s most interesting homes, the main and guest homes, with two bedrooms and 2,070 square feet, are set on two acres of rocky coastline dramatically perched over the ocean waves with unobstructed views to the horizon.  The home has several roof levels, designed as a cozy escape with wood-beamed ceilings, slate floor, wood-burning fireplace, and ceiling-to-floor walls of glass to capture the rock-and-water views. There is an abundance of nature to enjoy watching from migrating whales and playful otters to pelicans soaring close to the water searching for their next fish dinner.

Kim wasn’t the typical movie star. In her mid-30s, Kim semi-retired from acting to focus on her talent for drawing and painting and to escape the artificial Hollywood environment.  During this time, she painted, wrote poetry and song lyrics.  Her lyrics were so good that they were used by both Harry Belafonte and the Kingston Trio.  She made a few short forays back into acting with her last major film in 1969, The Great Train Robbery.

Born in Chicago, Kim, who is now 88, spent most of her adult life in California after a college gig touring the country as a trade show model, “Miss Deepfreeze,” for an L.A.  refrigerator manufacturer, which led to the start of her film career. In addition to Carmel, Kim also lived in another of California’s prettiest areas, Big Sur, where she raised horses.  In the late 1990s, Novak bought a ranch on the Rogue River in Oregon with her veterinarian husband.  Though he died several years ago, she still lives there and still rides her horse and enjoys her art.

Carmel has been a celebrity hotspot since the early years of Hollywood, well known for its charming village and picturesque houses.  Longtime-resident Doris Day made sure the town was pet friendly, and dogs are welcomed almost everywhere their masters are.  Carmel has been either the home or preferred getaway for Clint Eastwood, who was Carmel mayor twice and owns a restaurant there, John Steinbeck, Salvadore Dali, Jimi Hendrix, Steve Jobs, Joan Baez and Jack London.

As enchanting as the existing structures are, planning has been approved to build a 4,300-square-foot, three-bedroom, three-bath main house on the site should a potential buyer need a larger retreat for family and guests. 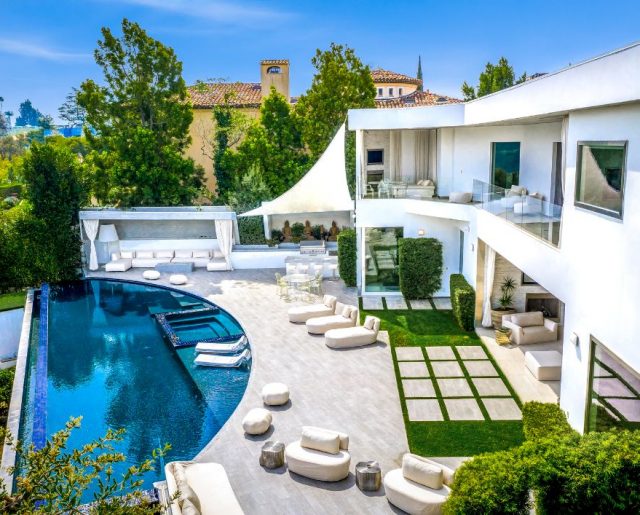 Pascal Mouawad, an internationally famous jeweler to the stars, has listed his Bel Air mansion for sale at $15.75 million....Read More