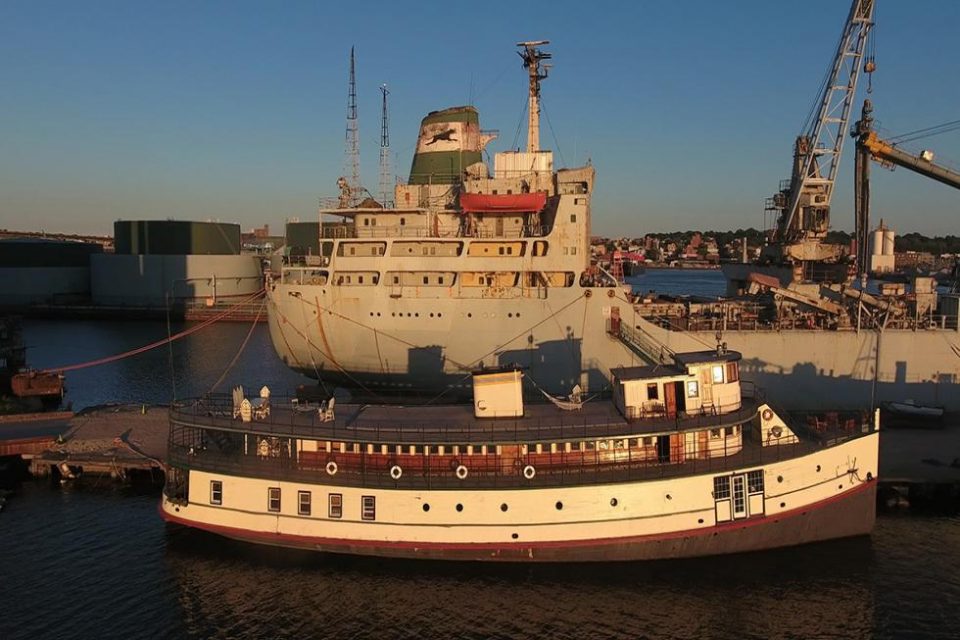 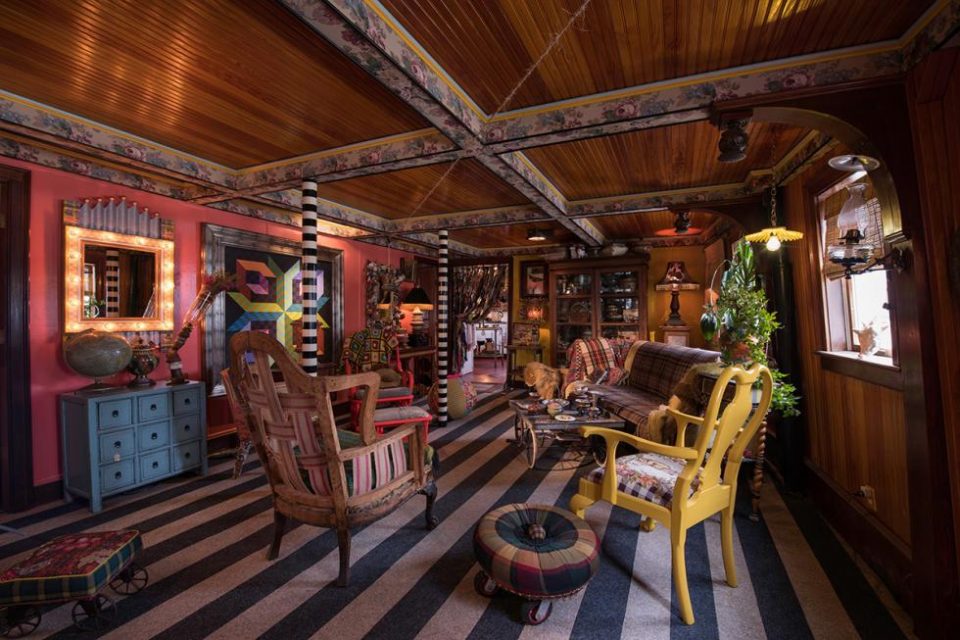 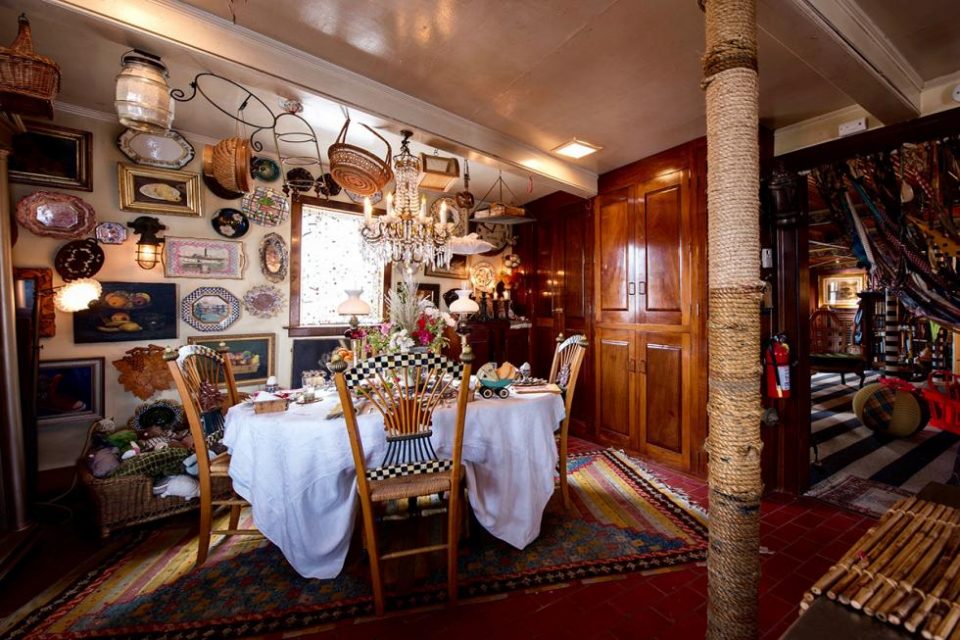 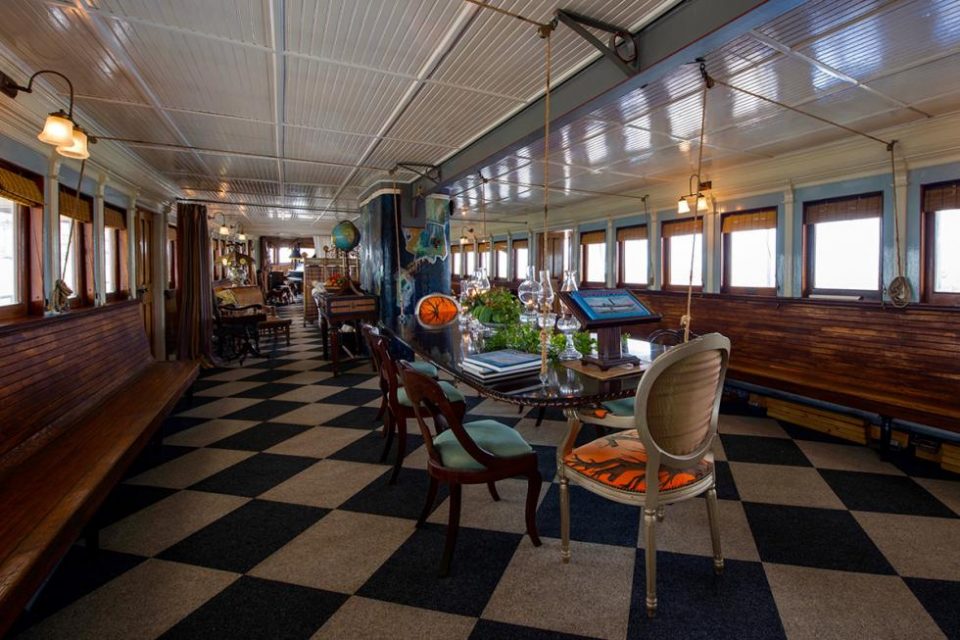 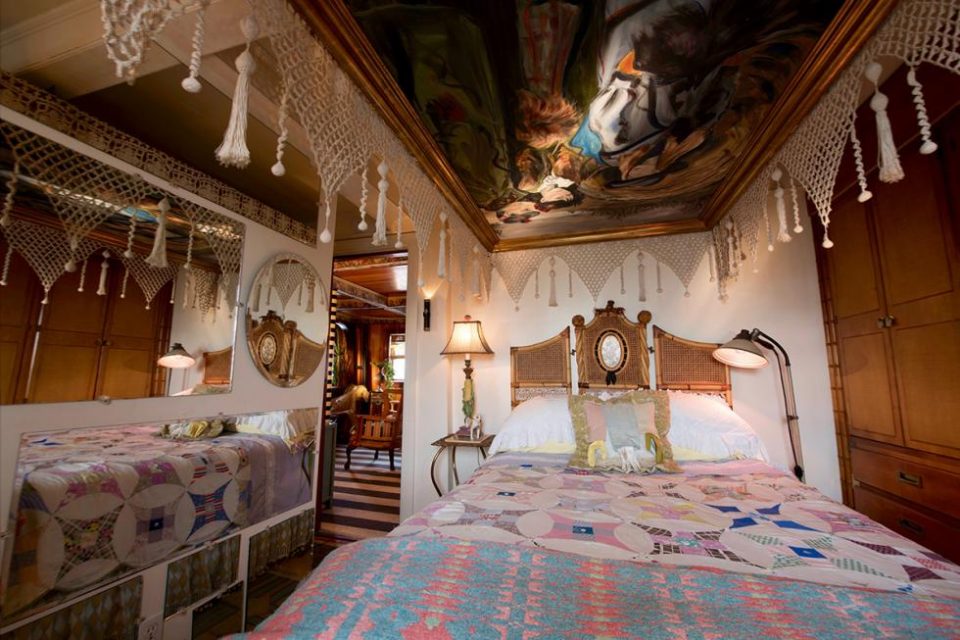 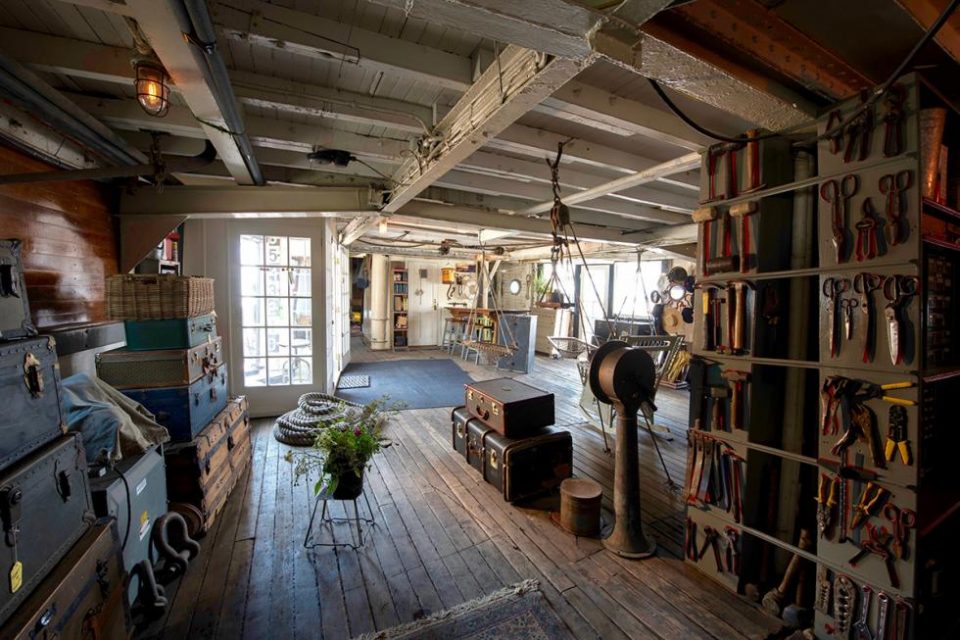 Yankee Ferry is one of America’s most unusual homes. A rare combination of maritime history and the unique whimsical style that the celebrated design duo of Richard and Victoria Mackenzie-Childs combined in their floating home over the last 15 years.

Built in 1907 in Philadelphia as Dida, the Yankee Ferry is the oldest existing Ellis Island Ferry; now the home of the famous design team Richard and Victoria Mackenzie-Childs. Measuring in at 147 feet in length, a 29-foot beam and eight-foot draft with a steel hull, the ship encompasses several levels including the engine/utility room housing a General Motors V12 engine and bedroom (former crew quarters) on the lowest level and the first deck with the original hold used as a workroom/creative space leading to the living quarters. The second deck houses a ballroom with a stage and an innovative gimbaled banquet table suspended by rope that can be raised or lowered depending on the type of function held. The wheelhouse has been converted into private guest quarters with its own galley-ette.

The passenger steamer started life as a ferry between Portland, Maine and the Casco Bay Islands until 1913. It was then sold to a Boston steamship line and sailed between Boston, Nahant and Pines Islands. At the beginning of World War I, it was commissioned by the Navy to transport men and supplies between Boston and the Bumpkin Island Training Station. After the war, it was decommissioned and ferried immigrants from Ellis Island until 1929. After that, it escorted sightseers around the New York Harbor and Statue of Liberty. Once again, war called and it served in World War II. In 1983, the ship laid up in Connecticut and Rhode Island until 1990 when it was purchased by Jim Gallagher who moved it to Manhattan’s Tribeca Harbor and began restoration work. Gallagher sold the boat to Mackenzie-Childs in 2003.

Richard and Victoria founded Mackenzie-Childs in 1983 in their Aurora, New York farm house and soon became world famous for their colorful and expensive furniture and dinnerware creations. After leaving the company in 2001, the couple purchased Yankee Ferry in 2003 and began transforming the aging ship with all the color and fantasy of their bold and fanciful style, patterns, colors and imagination. The couple’s unique artistic designs (Mackenzie-Childs creations can sell for as much as $30,000 and higher) evoke joy and warmth from bulkhead to bulkhead.

Located at the Henry Street Pier in Red Hook, Brooklyn, Yankee Ferry is now for sale at $1.25 million. The new owner will have multiple options for use from continuing to make it their houseboat with plenty of space to entertain their guests, an event venue, an art gallery or music school with auditorium and stage, or even moved to land. The listing broker is Michael R. Franklin of Franklin Ruttan Unique Property Specialists in New York. 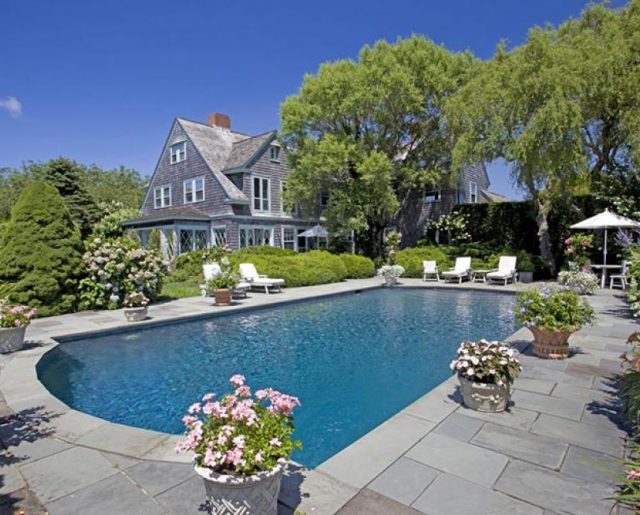 Original Grey Gardens Mansion! Almost every family has skeletons in the closet and relatives they wish would recede into the...Read More 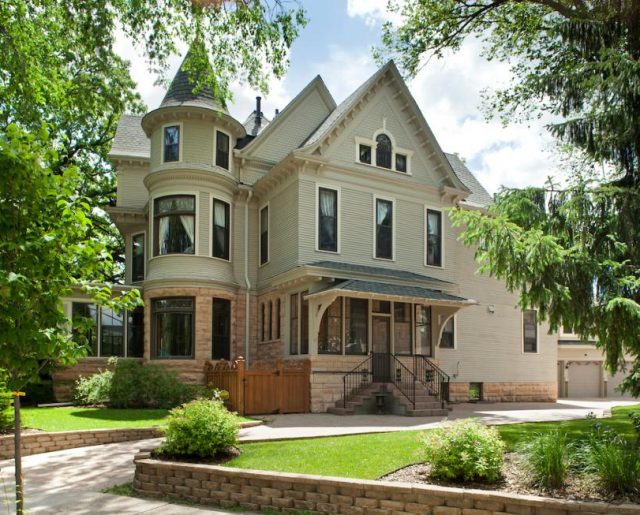