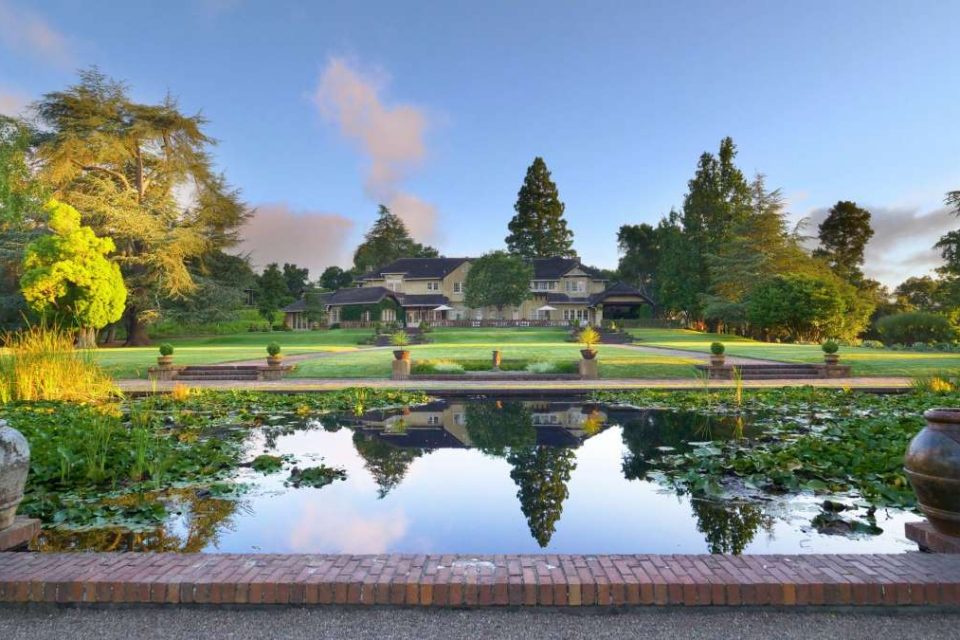 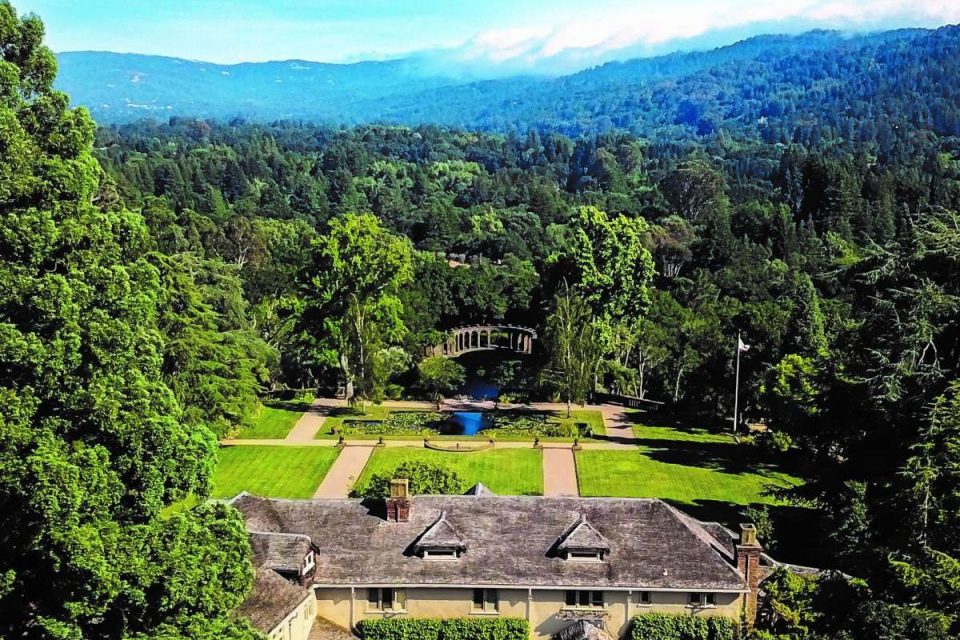 Located in Silicon Valley, Green Gables is one of California's largest estates. 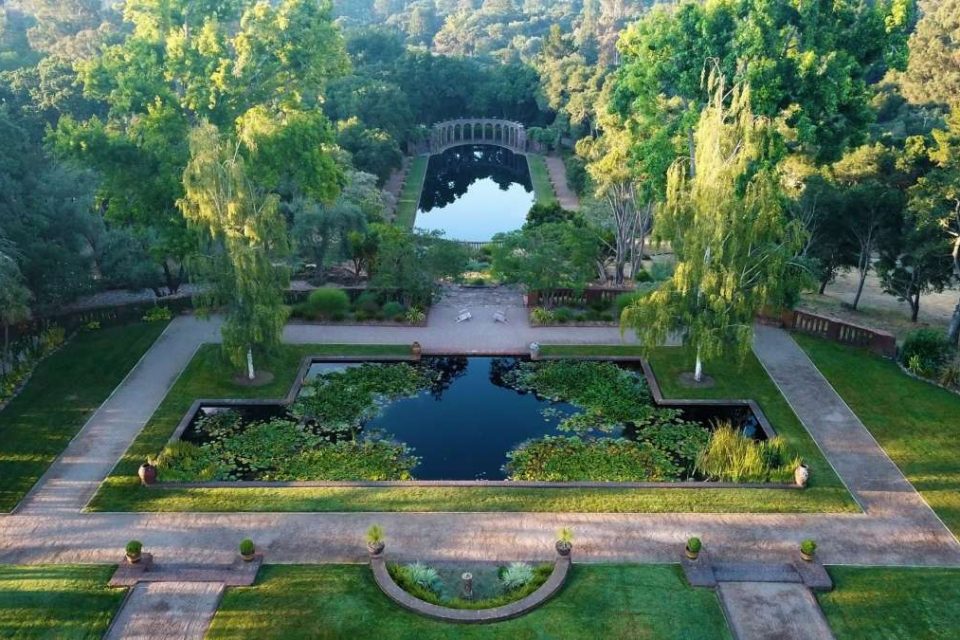 It has come to market for the first time - 110 years after it was built and is still in the same family. 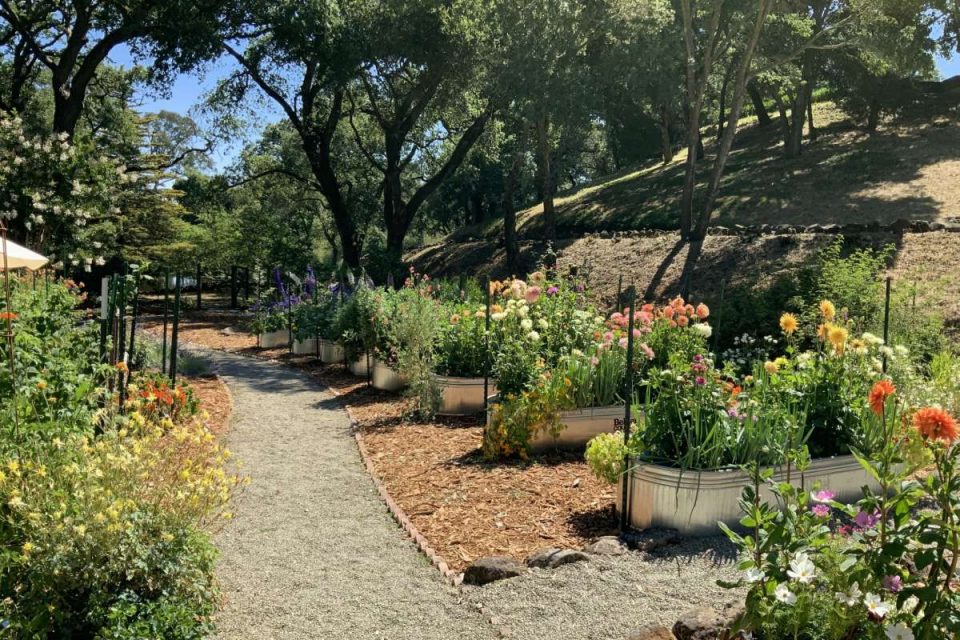 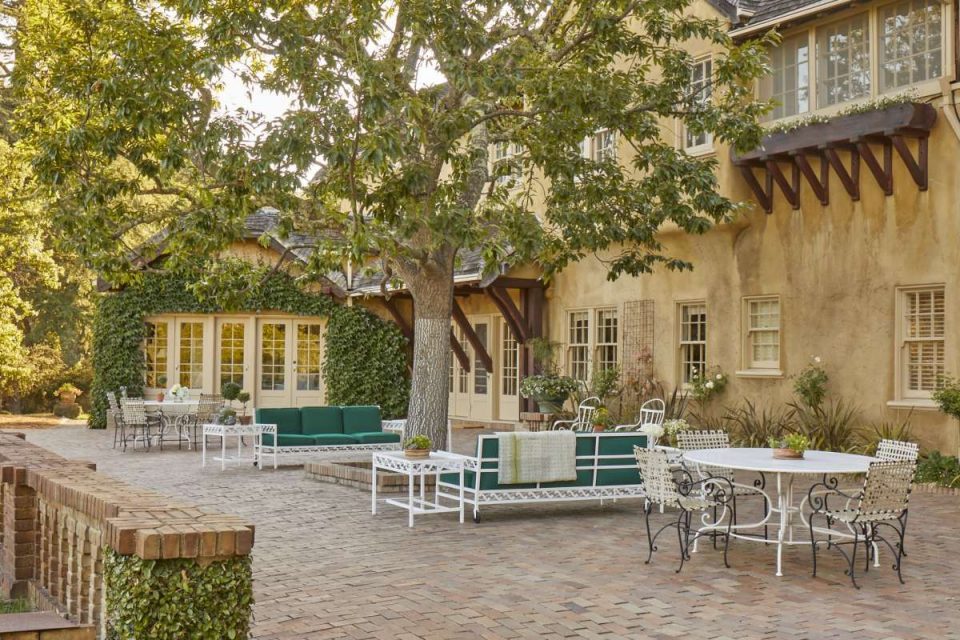 Used as a summer house, there are many comfortable outdoor areas to enjoy nature.

Summer barbeques are enjoyed on the terrace. 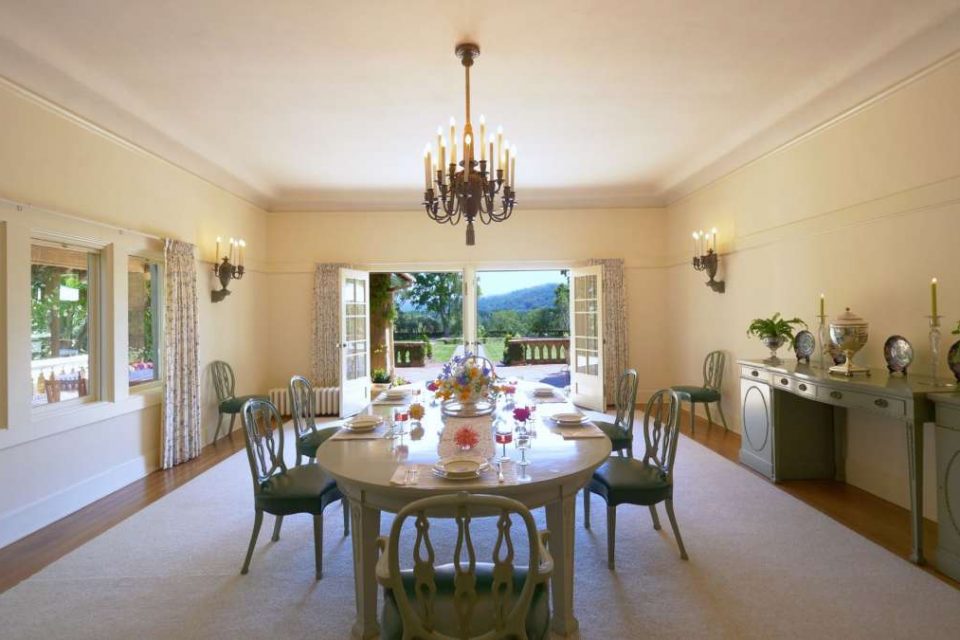 The formal dining room has hosted heads of state and international dignitaries. 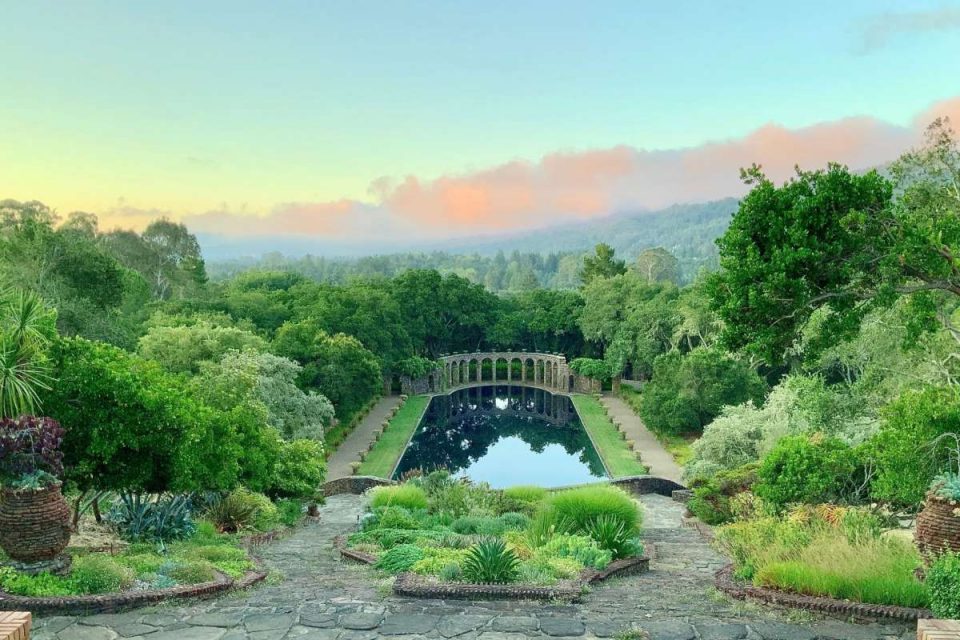 The Roman-style pool is the size of a football field. 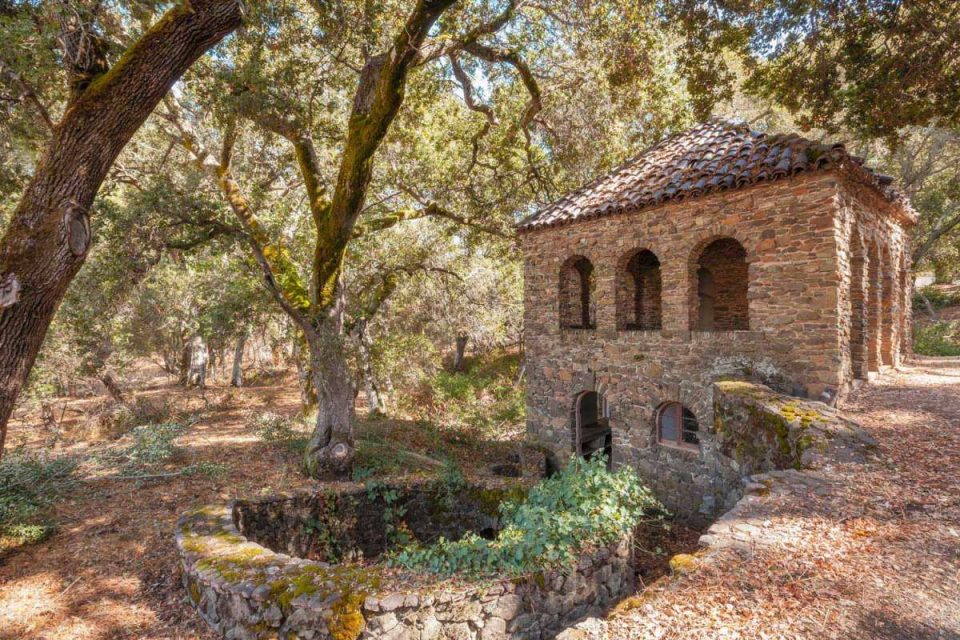 There are seven homes and other structures on the 75-acre property. 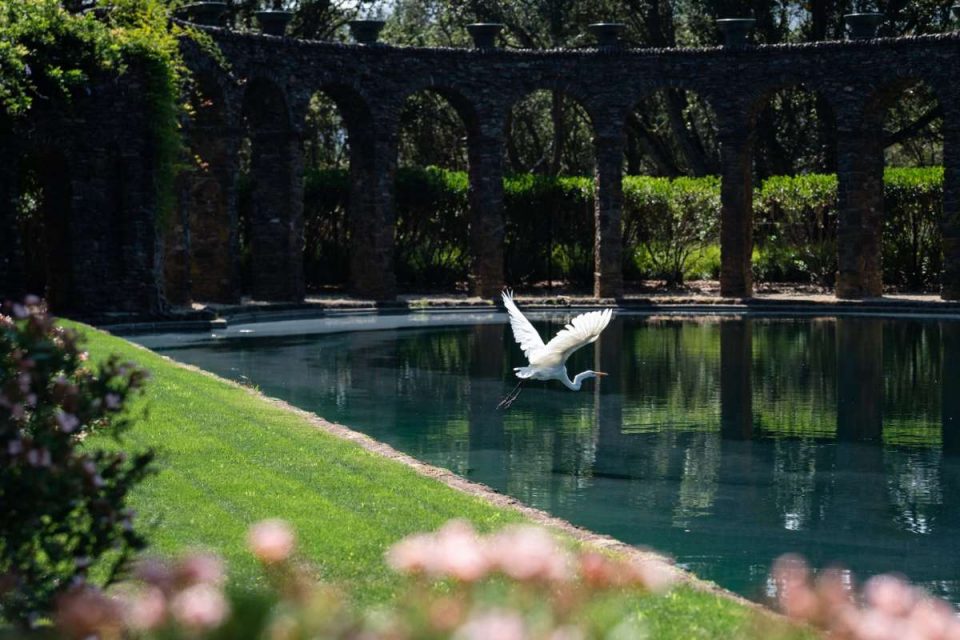 Designed by the Greene Brothers from architecture to landscape, the goal was to enhance and blend in with nature.

One of California’s largest and most interesting estates, historic Green Gables in Silicon Valley, was the summer residence of the entrepreneurial Fleishhacker family of San Francisco. After the 1906 earthquake and a family trip to England, the family began buying land to build a compound that would emulate the thatched-roof homes they had seen on their vacation. At 74 acres, and still in the Fleishhacker family, the property with its multiple homes and supporting buildings has come to market for the first time - 110 years after it was built. It is priced at $135 million.

Money was no problem for one of the busiest and wealthiest families in California when it came to creating a big and comfortable summer estate. Mortimer Fleishhacker, Sr. owned a paper company, an electric company, and was one of the country’s leading bankers. Documents show that the estate grew through close collaboration between Mortimer and architect/landscape architect Charles Sumner Greene of the famous architectural firm of Greene and Greene, with Mrs. Fleishhacker as the correspondent between the two on the details of the build. The goal for the design was that it appear natural to its landscape. It was a property of California firsts: first to have exterior walls of gunite, first to have a free-form swimming pool and the first to have a shingle roof that replicated the thatched roofs of England. The property grew over the years to include seven homes, extensive gardens, woodlands, and a Roman-style pool that is the size of a football field. The last home to be built on the property was completed in 1970, showing how the structures have expanded across the landscape since the main house was constructed.

In addition to views to the Santa Cruz Mountains, a park-like vista of oak trees and native grasses, and the interior styling of designer Elsie de Wolfe, one of the most outstanding features in the main house is the hand-carved furniture by the Greene brothers. Similar to Frank Lloyd Wright, the Greene brothers were well known for their design-and-artistic talent from architecture to landscape to furniture design and intricate wood carving as seen in the home’s game-room chairs. Highly detail oriented, the brothers focused on every detail of construction and the materials used and felt that even more utilitarian elements such as switch plates and walkways should achieve elegance.

According to the listing, Green Gables has hosted dignitaries from European royalty, U.S. senators, congressional representatives, governors, and business leaders. In 1965, the United Nations selected Green Gables as the site for its 20th-anniversary commemoration gala. Today, especially with its proximity to Silicon Valley, the estate would make an excellent corporate retreat and meeting center or continue as a large family compound. Historians and architectural students will appreciate the extensive documentation on the estate located in the Documents Collection of the College of Environmental Design, University of California Berkeley.

The historic Green Gables estate is listed by Christie’s, San Francisco for the first time since it was built in 1911, still inhabited by the descendants of the original owners. 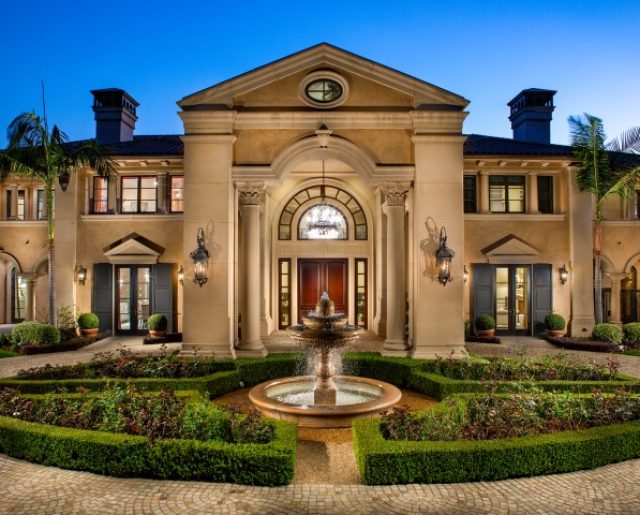 Burger Billionaire Serves Up L.A. Mansion With All the Works!

The American hamburger has spread well beyond the states, and chain-burger restaurants from McDonald’s to Wendy’s now span the globe....Read More